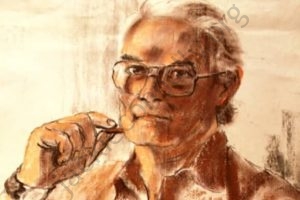 Jackie was born in June 1929 to Joey Connolly and Elizabeth McKee from the Mill Row. He was the eldest sibling to Jim, Joey, Gretta, Alice, Charlie and Teresa. A humble beginning, when hunting and fishing were necessary to provide meat for the table, left him with a passion for these sports. In later years, when working in England, he frequently packed in jobs when his father Joey telephoned with the news that there was a run of salmon on the Blackwater.

He worked at various occupations, from Sheffield Steel to Gillette Razors to Bachelors Soup. His shortest job was as a miner – he went down the pit with the day-shift and reappeared with the returning night-shift suddenly realising he did not like being underground. He settled for a few years on the Queen Mary 1, sailing the seven seas. Having taken up drawing from an early age he sketched the scenes of his world travels.

Having traversed the globe three times he returned to Armagh to marry the love of his life, Margaret Darragh from Navan Street. They wed in 1956 and he finally settled into a job as a psychiatric nurse in St Luke’s hospital. He was devoted to his duty and looked after the patients with dignity and respect. He was also an active trade-unionist fighting for the rights of others. He remained in post for 26 years.

As sectarian tensions increased in later years, he felt uncomfortable travelling with his shotgun to hunt and so stayed home and turned his attention increasingly to painting, as opposed to just sketching. Jackie retired from his occupation in his mid-50s due to ill health (having suffered his first heart attack aged just 40) and used the new found time to focus on painting.

He soon became renowned the length and breadth of Ireland for his lovely landscapes and excellent portraits. He was an associate member of the Royal Academy of Art and won the prestigious Conor prize.

Jackie’s nomadic urges were ever-present. He particularly loved to paint Donegal landscapes and was a frequent visitor there, as well as to France, Italy, Spain and Portugal. He once joined his son-in-law, who worked on an oil rig in the North Sea near Norway, and took time to paint some of the Scandinavian land and seascape.

Among his most impressive accomplishments were to have had some of his work displayed in London’s National Gallery, and to have been commissioned to paint a joint sitting of former Primates of Ireland Cahal Daly (Catholic) and Robin Eames (Anglican) – still on display in Armagh council offices. He even put his art skills to use designing the badge worn on the lapel of those trained at Craigavon School of Nursing.

His last painting was of his brother Joey (who had predeceased him).

Primarily he was a family man, wise and wonderful, devoted to his wife, 6 children, 15 grandchildren, 2 great-grandchildren and known by them all, not as Granddad, but simply as ‘Jackie’.